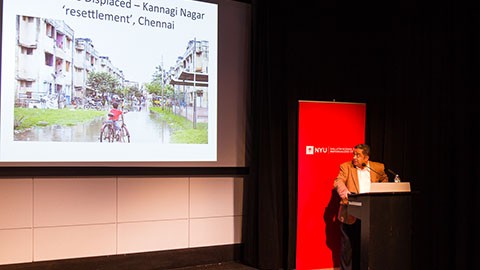 On October 3rd in the NYU Gallatin theater, MIT scholar Balakrishnan Rajagopal spoke to a group of students, professors and members of the community about the evolving human-rights conception of the “right to the city.” The crowd was largely more adult and professional than the audience at many NYU lecture events, based on the question and answer with the audience, and seemed to include New Yorkers working in areas from community organizing, urban planning, and academia. Many people scratched down notes as Rajagopal elegantly addressed imposing questions about the meaning of “the right to the city” and its uses in the fight for urban social justice.

Rajagopal began his revealing lecture by describing the global context that this indeed globally relevant idea is blossoming in:  one of a “massive shift in trajectory of global economic change,” whether that change be the increasing concentration of wealth and power in the top percentages of societies, the rising power of cities of the Global South, the increasing percentage of the world population that lives in cities, or the manifestation of climate change on the most vulnerable. As we know at the Urban Democracy Lab, now is a time of distinctly urban social justice concerns, for these reasons and more.

Rajagopal traced the nebulous and still-emerging concept of the Right to the City in a few distinct ways. He touched on its academic lineage, mentioning Henri Lefebvre, who foundationally and technically was the first to use the specific phrase “right to the city” in 1968. David Harvey, who built on the tradition of sociologists of the 60s who wrote about urban revolution and human rights “before the International Human Rights movement was yet born,” is also prominent. Academic and professional articulations of the “right to the city” borrow the language of popular social movements, though, from French 1960s anti-colonialism that Rajagopal mentioned and innumerable grassroots social justice struggles. He also emphasized human rights language and professional work as a site where such transformations, such struggles, taking place worldwide, are legitimized, or even stripped of their power. But what exactly is this broad-sounding “right to the city,” and how has and how can this idea be used to help people, or even to fight hegemonic power?

The right to the city is the assertion by marginalized groups that they have a right to exist, to participate, and to be makers and part of their cities. The right to the city is really an assertion of radical plurality, a “rebellion against sameness”: against the hegemonic forces that insidiously are making cities in the same mold, whether that means in their explicit criminalization of homelessness, in their design and architecture, their corporate storefronts, or the eviction and even forced relocation of those most vulnerable to being treated as a problem, as something to bulldoze through, by the state/corporations. This right is an answer to fundamental and wrenching questions about inclusion in the social, economic and political worlds of cities. More than a revolutionary thought, and beyond the obvious implied right to adequate and just housing and housing practices, the right to the city posits the right to true participation in making and remaking the city: after all, a city is its people. David Harvey uses the Marxist language and idea of “surplus” people, and Rajagopal points out that marginalized people are literally marginalized to city peripheries in many cases, for example, in the process of systematic exclusion (spatial, political, economical) that pushes the least privileged of Delhi the farthest from the heart of the life of their city. The right to the city is a complex thought that holds unique potentiality because it is a communal right, against all forces that are “keeping live social majorities out of any contention for equality,” a good description of hegemony that can be an opaque term outside academia.

One clear thing is the right to the city’s ability to connect the dots on social equality issues that are common between cities. Rajagopal pointed to Sao Paulo, Brazil as a recognized hot spot for community organizing and activist/theorist excitement around the right to the city. In 2001, they even passed a city statute in the service of protecting neighborhood self-governance and in the recognition of “adverse possession,” legalese of which squatter’s rights is one type. The document’s use in transitioning the right to the city from a somewhat “vague political articulation” to something more concrete and specific, including defining property as more than just an economic entity, one that creates social and public life and is intangibly “owned” by its users, seemed promising under President Lula, and now remains to be seen. Many other cities built on the Brazilian example, such as the Montreal charter of Rights and Responsibilities passed in 2006 and Mexico City’s 2010 Charter for the Right to the City. The Right to the City Alliance located in Brooklyn is a “national alliance of racial, economic and environmental justice organizations” that “seeks to create regional and national impacts in the fields of housing, human rights, urban land, community development, civic engagement, criminal justice, environmental justice, and more.” Their website righttothecity.org is an important resource to learn about the right to the city as “a unified response to gentrification and a call to halt the displacement of low-income people, people of color, marginalized LGBTQ communities, and youths of color from their historic urban neighborhoods.”

Of course, relevant policy and then enforcement of those policies must happen for there to be any meaning to these institutionally, professionally legitimized government documents. For the right to the city to retain its bubbling possibility of organizing collective resistance, its most exciting possibilities of re-thinking human rights as collective rights to spatial existence and social, political, economic participation, specifically in the urban space, it can not be neutralized into nice-sounding hollow words. As with any site of resistance, any social movement, any re-thinking of the status quo, formal recognition (by the government, the professional human rights field, etc.) has the potential to take away the very spirit of this disparate global movement. The right to the city is a complex, evolving idea of human rights and social justice work, but at its heart it is the simple cry that we all have a right to be here fully and help create the cities we love.