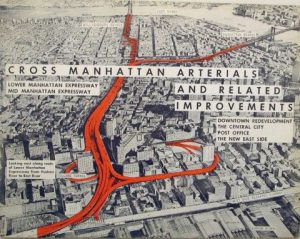 From our friends at A/P/A Institute NYU:

The NYC Department of Records and Information Services’ Municipal Archives presents an exhibit in collaboration with Below the Grid Lab and the Asian/Pacific/American Institute at NYU entitled In the Shadow of the Highway: Robert Moses’ Expressway and the Battle for Downtown.

The Lower Manhattan Expressway (LOMEX) was first proposed in 1929 as a small part of a plan to build highways throughout the region, then included in a 1941 National Defense proposal drafted by Robert Moses, it was envisioned as a key connection between Long Island and the interstate system. This 10-lane expressway, would cut across the heart of Lower Manhattan and stretched from the Williamsburg and Manhattan Bridges to the Holland Tunnel, rising over Broome Street.

In the Shadow of the Highway: Robert Moses’ Expressway and the Battle for Downtown focuses on various aspects of the proposed highway: architectural, political and personal.

Learn more about this project by exploring this exhibit at the NYC Department of Records Visitor Center, 31 Chambers Street. We have a wheel-chair accessible entrance on Reade Street between Elk and Centre Streets.

To attend the opening of the exhibit on October 27th, please RSVP by Friday, October 23rd to visitorcenter@records.nyc.gov.