The city of Most in the Czech Republic was a unique case of socialist urban planning during the communist regime. Old Most was forcibly moved due to the large amounts of coal found under the city, which resulted in the creation of New Most. New Most became a “laboratory for the larger project of socialist modernization” due to its spatiality and industrial nature. Dr. Eagle Glassheim is a professor at the University of British Columbia whose research centers on environmental degradation in the industrial region of former Czechoslovakia. His new book, Cleansing the Czechoslovak Borderlands, offers a look at the the ethnic cleansing that took place on in the border regions as well as the movement of Most. Urban Democracy Lab contributor Kai Bauer sat down with Dr. Glassheim in Prague to discuss his research.

KB: Can you give a brief background of the city of Most as well as your new book?

EG: The book focuses on the borderlands of Czechoslovakia at the end of WWII and the postwar period as well as a city in the borderlands called Most. The city of Most was already an industrial region before WWII, but this accelerated quite rapidly after the war.

The original population, Germans who were expelled in 1945 and 1946, were replaced by Czech, Slovaks and Romani shortly after. The new population is only loosely connected to these places in the borderlands. These areas are sometimes called a “laboratory of socialist experimentation” so it’s not quite a blank slate for Communists to create their ideal industrial society, but it is a space that does provide a lot of opportunity for them to build a new economy and social society. Another part of the borderlands’ industrialization is the environmental devastation of the region that follows its development. This ranged from an increase of strip mining of coal to rapidly expanding surface mines that ate up hundred of villages. Eventually this led to the decision to move Most, which is an extreme case of communist productivism, because the city was located over large coal deposits. It was a case of sacrificing history and architecture, and to an extent community, for coal.

KB: In your article “Most, The Town that Moved” you explain that most of the inhabitants of Old Most preferred to live in the modernized housing of New Most. Do you think that their attitudes were due to a belief in communism, the fact that they hadn’t lived in Old Most for an extended period of time, or purely material desires for better housing? If the residents hadn’t been so approving of the move, do you think the Party would have gone ahead anyway?

EG: I think it is all of the above. All of the residents of Old Most circa 1950 had only lived there for a few years because the majority of the city center was inhabited by German speakers. So the new arrivals didn’t have an attachment to the architecture or the layout of the city. We orient ourselves around certain landmarks and those landmarks have a history and the more you know that history the more you are attached to those places. Our sense of place is partly spatial, but within that spatiality there’s also history and culture. So when you have people come to a place where the history is not their history, they lack attachment. Also, the residents of Northern Bohemia were heavily communist and heavily working-class miners and laborers. When the coal mining company said there are tens of millions of tons of coal underneath this old somewhat rundown city and we can turn a profit of 2.5 billion Czech crowns (over 100 million USD) by mining this coal and destroying the city of Old Most, then this sounded quite sensible to the population. There was almost no popular opposition to moving the city. The new city plans included these high-rises, or panelaky, that had private bathrooms, central heating, and basically all these things were considered modern and a lot of Old Most didn’t have that. They did a poll and over 90% of Old Most wanted to move to a new location, so there was a lot of popular support and these regions did heavily believe in the communist regime. 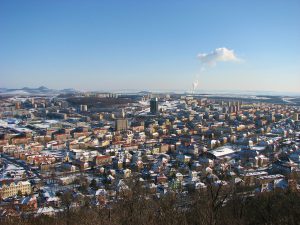 KB: Do you see New Most as a success in terms of socialist urban planning? If so, how does that relate to the current socioeconomic reality of the city?

EG: I think it is very hard to judge the success or failure of urban planning solely based on the urban structures. Part of Most’s problem was that it was in an area devoted to energy and it was very polluted. There were a lot of social problems in the region that even the communist regime didn’t understand. Maybe it wasn’t a vital urban space because it wasn’t a vital society. You can’t undo that problem by making a new urban space. In the 70s and 80s there were these deadly fogs and the government warned you not to leave your house. They would send children up into the mountains to get clean air because there were many cases of asthma and respiratory issues. The government was well aware of how bad it was and made some efforts, but they were unsuccessful because the main problem was that they burned large amounts of low quality coal that gave off sulfur dioxide and ash. The region had a celebrated industrial reputation during the Stalin era, but by the 60s Most was seen as more of a cultural backwater and as a place where people would get out if they could. This reputation largely continued after communism. The 90s were a very tough period with low air quality and high unemployment. There was a lot of scapegoating of the Roma people during this time and that is not necessarily over today. There’s a lot of ongoing segregation and the Roma still live together in an area where they were put by the government in the 1970s. However, New Most is modernist city filled with green space and this was Le Corbusier’s vision. The dense high-rise housing with lots of green space was designed by planners and architects that studied Le Corbusier, so in that respect there is success.

KB: How did the communist regime publicly rationalize, if they did at all, the public degradation of health?

EG: I have not come across in my research any examples of them publicly rationalizing the health cost. They were willing to stand for life expectancies that were 3-5 years lower than the rest of the country because they depended on this region for coal and energy. You can be almost certain that discussions of that sort happened in the higher levels of government. There were lots of complaints in Czechoslovakia, particularly during the period of “normalization” in 1966-68, that the regime was doing exactly this: that they were sacrificing the residents of the region for the production of energy. The government rationalized the cost because this region was a vital energy producer for the national economy. They would pay people to live there and organize trips for the children to breath clean air so they were willing to mitigate the effects, but ultimately were willing to sacrifice the health of residents and landscapes for production. Critics certainly made that clear, but the government never publicly recognized it.

KB: Thank you Dr. Glassheim for your time! His book, Cleansing the Czechoslovak Borderlands, is available through University of Pittsburgh Press.