This summer, I learned that Facebook is no longer cool and climate change is depressing. I was standing in a room of Oakland high schoolers, attempting to teach them about how to use social media to spur action and understanding of climate change, instead thinking, “I guess I’m not cool anymore”. I had been talking about Facebook Live and its potential for talking about climate change, a platform for getting your voice out there with facts presented in a digestible way. But the response I was getting was, “No one even uses Facebook anymore! Only my mom…We just use Instagram”. My social media knowledge was clearly out of date and I had to adapt to new formats of thinking and demonstrating ideas visually and textually.

I had to do a lot of adaptation this past summer as I worked with Rooted in Resilience, an environmental justice organization in Oakland CA, and the Resilient Communities Initiative (RCI), a coalition of Bay Area environmental and climate justice organizations. Rooted in Resilience, formerly known as Bay Localize, is a small non-profit organization that works on promoting food justice, youth training, and fighting against environmental racism. Their mission is to promote equity in Oakland. This summer, we worked closely with other Oakland-based community organizations, such as the Oakland Climate Action Coalition (OCAC), Local Clean Energy Alliance (LCEA), the Rose Foundation, and many more. Often, members of each organization overlap and I found that the Oakland environmental justice movement really feels like one big family. My first induction into that family was the task of memorizing the many acronyms used so I could speak as confidently as anyone else. The Resilient Communities Initiative (RCI) is a coalition containing many of the above-listed organizations as well as larger California environmental groups, such as Greenaction and the West Oakland Environmental Indicators Project (WOEIP). The work done by Rooted and RCI complements each other. Rooted’s mission manifests in a practical way: tree-planting, training Oakland youth leaders through the Rose Foundation’s New Voices Are Rising Program’s Climate Justice Youth Leadership Academy, and working with organizations such as OCAC to plan for a climate-resilient Oakland. RCI’s mission manifests in a more organizational way, serving to hold together eleven Bay-Area organizations for maximum collaboration. Therefore, much of RCI’s work is to further, through social media and funding, the work that its organizations have already done.

Throughout my work this summer, I became familiar with both the feeling of hopelessness that comes with work on climate change and the disorganization that comes with underfunded non-profits. Every day, there would be new predictions of forest fires, flooding, climate refugees, weather changes–things to shake the core of our society. Alongside this, there would be a daily restructuring of plans and tasks based on resources available, how overstretched colleagues were, or what immediate events and crises surfaced. There was also a restructuring of staff and trading of staff members between various environmental justice organizations as interests and positions changed. Rooted and RCI both attempt to address the coming human and environmental precariousness by employing the concept of a resilient society, but they have to constantly fight to survive and to do community work, must also become resilient to the funding and organizational difficulties faced by small NGOs.

At its core, resilience is about the ability of a system or community to spring back and recover after disturbances. It is sometimes viewed as the next step past mitigation of climate change and adaptation to climate change–resilience is the logical next response to a climate that is changing extremely fast. This change, as we have seen so clearly over the last few years, is no longer hypothetical or cushioned by talk of the future. Intense floods, droughts, hurricanes, and other weather events are occurring all over the world, and clearly, we as humans, if we are planning to survive, need to become more resilient. Just as environmental resilience is about recovering after disturbances, the ability of small organizations such as Rooted and RCI to survive and effect change is dependent on personal and organizational resilience.

Macro-level resilience planning focuses on efficient utilization of resources and adaptability to differing environments. In a similar, yet much smaller way, my work focused on how to use simple social media and graphics tools to tell complex stories about climate change in an understandable way adaptable to various circumstances and audiences. There are plenty of scientific reports on the effects of climate change, but too often they remain in the scientific realm because people assume that the science won’t affect them specifically or simply because the language is too complex. Therefore, it is crucial to resilience to increase understanding of why we need to work at becoming resilient, and this is achievable through social media. For example, here is a graphic I created specifically introducing the idea of resilience:

Another graphic that was in development offered information about divestment from big banks, thereby promoting economic equity and divestment from the environmental destruction connected to big banks: 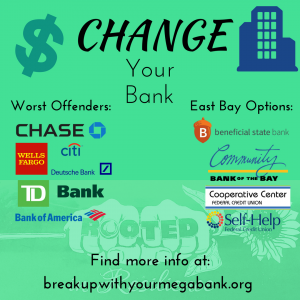 It’s natural to sink into depression around ideas of climate change. “But that doesn’t make me want to do anything,” one fellow said to me during a brainstorm session about how to communicate RCI’s sea-level rise centric mission. “That just makes me think we’re doomed and there’s no point in even trying”. We had suggested a mission based around the general feeling of “Your house will be flooded. Act now!” and were gauging the response from the youth about it. The response we got was: We need more hope. To them, Instagram and social media is about living your life openly: showing yourself online. There’s hope and life in that; representations of climate change should be rooted in that too. And that’s what I took out of this summer: climate change is depressing, but resilience is about hope in the face of those circumstances. Hope is powerful and we can spread that through simple tools such as social media. Yes, resilience is about architecture and physical resilience, but it is also about communities tied together a common future and their ability to communicate that and their own resources to each other.