By 2030, 2 billion people will live in unrecognized conditions or “gray spaces.” This proliferation of slums and informal settlements are part of a growing trend across the world, but particularly in the Global South in cities like Rio de Janeiro, Jakarta, and even Israel-Palestine. Oren Yiftachel is a Geography and Urban Studies professor at Ben-Gurion University in Israel. His lecture at the Hagop Kevorkian Center at NYU on February 16th entitled “Gray Space and Creeping Urban Apartheid: Learning from Israel-Palestine” offers an intimate look at the premise of his new book, which analyzes the neocolonialism of modern unrecognized settlements in Israel-Palestine as well as how they mirror larger trends of displacement across the globe. Yiftachel’s call for a more flexible definition of citizenship is put into practice by Karen Lee Bar-Sinai, an Israeli architect who designs urban plans for the two-state solution. Her work provides an urban planner’s take on what these changes can look like.

Yiftachel’s gray spaces are due to an influx of “shadow population[s]” whose “displaceability” corresponds to varying degrees of citizenship. As these gray spaces grow, people are spatially and legally marginalized in a new manifestation of apartheid, Yiftachel declares. The gray space is a place of shifting citizenships where groups are not fully integrated, but not evicted. An urban embodiment of these varying degrees of citizenship can be found in Jerusalem. White levels of citizenship correspond to where Jewish people are, light gray citizenship comprises Arabs inside the walls as well as foreign workers, and dark gray citizenships are Arabs outside the walls. These gray spaces are “growing assemblages of bodies, groups, zones, developments, and transactions” that balance between the light of legality and citizenship and the dark of criminality, eviction, and exclusion. People who occupy the gray space are “neither integrated nor eliminated.”

As people in the gray space are profiled, the borders that divide them are expressed on their bodies and their transgression becomes a part of their identity. These “ceaseless urban borderings” are familiar to groups such as the Sri Lankan Eastern Tamils, where racism is expressed towards them through anti-land invasion and anti-slum rhetoric. Another example of gray space profiling is the treatment of foreign labor and asylum seekers in Tel Aviv. Israeli media characterizes these 60-70,000 urban dwellers as “infiltrators” and utilizes anti-integration and xenophobic discourse to marginalize them. This exclusion forces them into informal economies of illegal apartments and schools that are unregulated and dangerous. As open urban spaces beget ghettos, marginalized people become an urbanizing force in their own right. Conflicting logics of exclusion and expansion create large swathes of displaced people, while governments continue to grow through displacement to further cater to the most privileged. 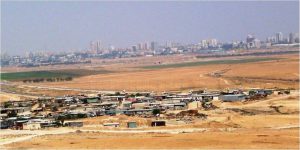 As governments seek to legally rationalize their expansion, the colonial concept of terra nullius or “nobody’s land” is applied despite the temporary dwellers there. For instance, the Israeli government systematically displaces Arab Bedouin tribes through legal loopholes. Often a single grandparent’s lack of registration with the pre-1967 government will be grounds for expulsion, despite the fact that many tribes have documentation dating back hundreds of years. One indigenous gray space, Beersheba, is trying to urbanize themselves instead of moving to urban areas. They are still unrecognized by the government and have experienced extreme forced displacement. In their area, which has a relatively small population of about 200,000 compared to the West Bank’s 1.7 million, there were 1,106 housing demolitions last year compared to the West Bank’s 276, according to Yiftachel.

One of the speaker’s interviewees explained to him that the Israeli government needs their labor, but wants their land and they want them to modernize, but not integrate. Ultimately the government wants them to live “like a shadow,” the interviewee implored. Governments can keep shadow populations by forcing people into a state of “permanent temporariness” where institutions manage citizenship by removing agency. When Palestinians march chanting, “Yes to recognition, no to uprooting,” they are protesting a system of control that impacts them spatially, financially, and legally, while attempting to keep them in a marginalized limbo.

Yiftachel declares that we are in an urban/metro revolution that calls for new critical urban theory that centers the Global South. He calls for more robust theorizing on time management and how “permanent temporariness” impacts urban studies, as well as new research for these varying degrees of citizenship. He introduces the concept of metro-citizenship to counter the state centered, closed, nationalistic concept of the citizen. Metro-citizenship is characterized by openness, porous boundaries, post-nationality, and malleability, and allows people to move freely.

One individual who is bridging this gap between theory, policy, and urban planning is Karen Lee Bar-Sinai, who spoke to NYU’s Environment and Society class on February 16th. She is an architect and designer at SAYA/Design for Change who specializes in what she describes as “designing peace” by creating visual representations and blueprints of what a two-state solution can look like. Her proposals for shared public transportation systems that use passports or ID chips provide an example of what tangible metro-citizenship might look like. She designs security hubs where people can move in between Israel and Palestine at protected, but subtle borders similar to airports. By combining borders and security with normal urban architecture, she utilizes “spatial based thinking and a holistic approach toward conflict resolution.” Bar-Sinai creates designs with varying degrees of permeability that can be adapted for varying levels of security, but remain “a place you would want to be.” Her work provides a framework for how metro-citizenship could manifest in one of the most conflicted areas in the world. Her work builds upon theory and demands that in creating a workable urban future the “’hopeful leap’ needs to be carefully planned.” These two speakers offer theory and praxis for understanding and mitigating the Israeli-Palestinian conflict as well as outlines that can help us imagine our own local urban futures.