Brandon Kielbasa is a tenant organizer and housing counselor working for the Cooper Square Committee in New York City’s Lower East Side as the Lead Organizer. He has also worked with the Association of Neighborhood and Housing Development, Urban Justice Center, Manhattan Legal Services, New York State Attorney General, University Settlement’s Project Home, and the Good Old Lower East Side.
Claire Birmingham is a Lower East Side resident and tenant leader with Cooper Square Committee. She organizes with fellow residents for tenants’ rights.
How did you get involved with the Cooper Square Committee (CSC)?
CB: My story is that I lived down the block and my building was sold to a new landlord who turned out to be quite an aggressive landlord that partnered with a private equity firm. Their MO was to go and flip buildings so there were a lot of aggressive tactics that he was using on us, mostly horrendous construction harassment. There was no communication. We were all up in arms. He bought the building and within two months 75 percent of the apartments were vacated. Those of us that were left banded together and came over here [the Cooper Square Committee] and said, “What’s going on? What can we do? What’s our game plan?” Then Brandon helped us to form a tenants’ association and then put us in contact with some other people who had the same landlord so we formed a larger tenants’ association. And since then we’ve kept our fingers in, seeing what we can do to help with housing in the community.
BK: I started almost eight years ago—February 2007—as paid staff. I started out working as a counselor, which meant helping people on a one-on-one basis. At the time that was all Cooper Square had funding for, although our roots were in community organizing and helping tenants come together collectively to address housing issues in the neighborhoods, mostly affordability and harassment. But after a couple of years we were able to tailor our funding for me to be more of an organizer so I could step back into that role and they could have somebody on the ground too. So for the first three or four years I was half tenant counselor, half organizer, and then the last two or three years I’ve been in a full-on organizing role and lead organizer as we’ve been able to bring on a couple of other staff. 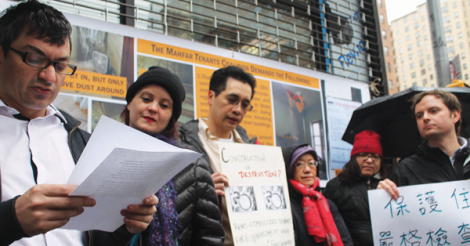 Do you think gentrification is inevitable?
BK: No, absolutely not. I think it is systematically propagated by the real estate industry. It is a notion they continue to back as something inevitable so they can make huge profits in these neighborhoods. They back the legitimacy of the idea that it is inevitable so they continue doing what they’re doing. Because who benefits from gentrification? It’s the banks, the landlords, and the developers. Most of the regular, long-term residents don’t get anything from it. In fact they consistently lose parts of their community from gentrification and also get additional displacement pressure when it happens.
CB: I think that’s part of the myth that gets sold to us: “Oh it’s going to happen. Neighborhoods change. Of course it’s only a few disgruntled people who like living in a dirty neighborhood.” There’s no reason a neighborhood should be dirty. You don’t need to have luxury housing to have a nice neighborhood, but there’s this idea that it is not only going to be nicer for everybody, but it’s going to be morally superior. And if you don’t like it then you don’t belong here. It’s a sales pitch.
BK: I think the myth of gentrification (it being inevitable) is comparable to the myth of the American dream.  The notion that “if you keep working hard… one day you’ll make it,” is a falsity these days.  Plenty of working-class people work very hard their entire lives and get little to nowhere.  Who benefits from their labor and continued efforts as they try to “make it?”  The 1%, the rich.  The credibility of this notion (the American dream), like that of gentrification, greatly benefits those in power.  Organizing can be a means for challenging these ideas and the power structure they support.
CB: When you look at what Jane Jacobs was saying, that you need a lot of different of housing in a neighborhood so people can be upwardly mobile. You’re young, you start out in a studio. You get married, you move into a one bedroom. You have kids, you get more, you have that option. People can’t do that now. They’re knocking out a wall in the closet and putting a crib in there so there’s no upward mobility aside from luxury housing. It’s just one big, giant step, rather than any kind of levels laterally or otherwise.
In your minds, what is the ideal future of the Lower East Side?
CB: I’d like to see affordable housing strengthened. With the Republicans in power, it’s going to be an uphill battle. But Albany controls the rent laws so that leaves us vulnerable to politicians in other counties who have no stake in what our rent laws are, so it doesn’t matter how they vote. So the Real Estate Board of New York, a big lobbying agency, just pours money into that. I’d like to see us get home rule.
BK: For us to really secure the stock of affordable housing in this neighborhood we really need to get some strong rent laws on the books and also plug some of the systemic loopholes. The rent regulation laws for New York City actually exist at a state level, and something to keep in mind is that the real estate industry lobbies more than any other industry in New York State, even more than hedge funds. They are the single largest lobbyist by a long shot. They work very hard to keep these laws weak so they can continue to take affordable housing and convert it into luxury housing.
CB: What I would also like to see in the future of New York is more tenant protections extended to market-rate tenants. As it stands now, if you’re a market-rate tenant and your landlord is doing some things that are unsavory and you want to join the tenants’ association, you don’t want your landlord to know that because you’re hobbled. Suddenly, you want to stay another year and it’s a five hundred dollar increase. People don’t want to make waves because they have to protect their homes. That just makes sense. It doesn’t mean that they’re not behind you and what you’re doing but self-preservation says you can’t make waves. So I’d like to see that.
BK: These landlords are making their money; we’re just saying that community members, tenants, deserve a fair shake. They deserve safe, habitable, affordable housing.
CB: We’re talking about housing; we’re not talking about a luxury item. Not everyone needs a five hundred dollar handbag but everybody needs a place to live. So that’s why we’re saying this.
BK: I’d like to see even more of what Claire and I are working on, which is creating a well-connected tenant base in the Lower East Side. Tenants who really own the issue of housing in their community and say, “This isn’t something I have the option to get involved with. This is something I have to be involved in. If I care anything about New York City or the socioeconomic diversity of the city, if I care anything about the racial diversity or anything that makes New York such a wonderful place, then I have to be involved with these housing battles.” So, if anything, I’d like to see more interconnectedness, more organizing. 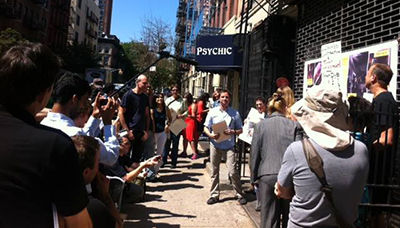